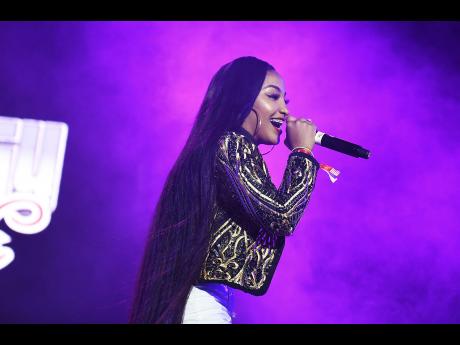 Gladstone Taylor
Shenseea
The Reggae Sumfest small stage has introduced a few of the fiercest names in reggae and dancehall to a wide music-loving audience and has even acted as the platform to ‘buss big’. The list includes reggae entertainers Warrior King, Bushman and Shenseea, who have graduated to the main stage following their appearances on the small stage.

Its reputation for promoting talents is highly revered among the fraternity of emerging artistes despite the early placements and short performance time it offers.

According to emerging artist D’Yani, who is performing on Reggae Sumfest Reggae Night (night two), an opportunity, no matter how small is at the end of the day, a good opportunity.

“The platform is there to explore. As a young artiste, you must use, every minute to deliver a good solid set that will leave a lasting impact,” he told The Gleaner.

The Sad Story singer was recognised by the Reggae Sumfest team while performing on the Fame 95FM Road Party.

“The eight to 10 minutes up-and-coming artistes like myself have will still be a part of the broadcast to an international audience,” he said. “I honestly did not envision being on the stage when I attended in 2016 to see Barrington Levy on the stage.”

Dancehall singjay Kim Nain shared the same sentiment. “It is the beginning for another part of the musical journeys young artistes are taking,” she said.

Meanwhile, Imeru Tafari, 24-year-old son of Queen Ifrica and fast-rising reggae artiste, sees the stage show like any other event where he is given time to perform.

“It could be a Reggae Sumfest, Rebel Salute or smaller event – to me, it is about showing not only my talent, but most importantly, sharing the message of positivity and righteousness. For all the shows, it is the same,” he said.

Imeru Tafari is cognisant that he will only receive five minutes to perform his set but nonchalantly answered, “It’s not a big problem. Two song can still deliver in that time.” He says his true satisfaction comes from being able to share the lyrics.

“The Reggae Sumfest stage is definitely one that will expose me to bigger platforms being an international show, and I am hoping it brings me across the world,” he added.

“It is my second time performing. The first time, my mother called me on stage to perform with her. There I got the chance to sing Damian ‘Jr Gong’ Marley’s verse from their collaboration, Trueversation,” he recalled.

Other young reggae performers include Abatau (son of Tony Rebel), Naomi Cowan, and Stushie, and among the emerging dancehall acts Rygin King and Vanzo.