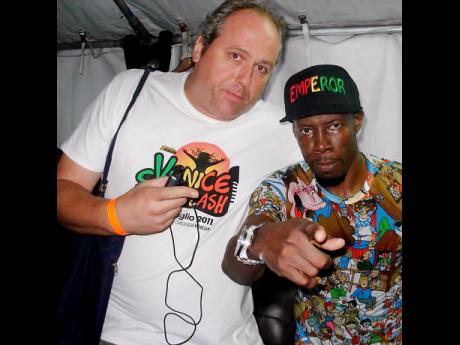 When Reggae Sunsplash folded in Montego Bay after its 1992 staging, Italian newspaper publisher Steve Giant, a loyal fan of that festival, was left a disappointed man, as making the annual trek to Jamaica had become an integral part of his life.

However, Giant’s disappointment was short-lived as in 1995, he learnt that Reggae Sumfest had replaced Reggae Sunsplash on the Montego Bay entertainment calendar and since then, he has been travelling to Jamaica for the past 23 years to satisfy his passion for reggae music and his growing love for Jamaica.

“My first Reggae Sumfest experience was in 1995. Basically, it’s been 23 years without interruption,” said Giant.

Over the years, it has not only been Reggae Sumfest that has been pulling the big Italian, who also manages a radio station, the Radio Base Popolare Network, which broadcasts reggae from morning to evening.

“I love the music, the parties, the beach… the Jamaican way of life style. That’s why I come back every year,” said Giant.

“Unfortunately, there’s no reggae festival like Reggae Sumfest in Italy … we had a big one, but they moved it to Spain.”

Despite not having a major reggae festival in Italy, Giant says reggae is nonetheless quite big in his homeland. He sees his popular magazine, RASTA SNOB, which he has been producing for more than 30 years, as one of the vehicles driving the growth of the music.

While each new year at Reggae Sumfest gives giant fresh “emotions, sensations, vibrations,” there are some special memories that have not dimmed over time.

“Definitely Shabba Ranks arriving by helicopter,” said Giant, in reflecting on Shabba’s spectacular arrival by helicopter at the venue back in the 1990s. “I also enjoy the clash in music between Beenie Man and Bounty Killer, and the many international artistes who have duet with the Jamaican top artistes.”

Like many fans of Reggae Sumfest, Giant is mightily impressive by this year’s star-studded line-up and has identified several acts he can’t wait to see.