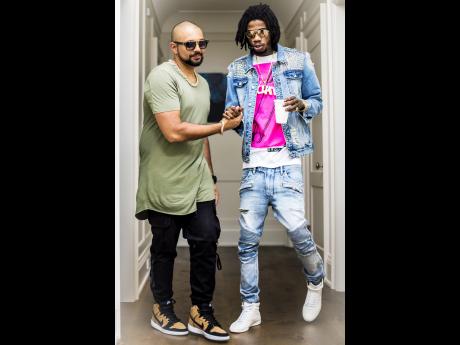 DJ Frass is ecstatic about the success of his most recent work, Gyalis Pro, a song done by Champion Boy Alkaline and Grammy award-winning entertainer Sean Paul.

A little over a week since the video has been released, Gyalis Pro is on trending on YouTube and already has more than one million views, way out performing Alkaline’s After All ,  recording  some 1.6 million views in a little over a month.

“From Alkaline and Sean Paul set the time to meet up at the DJ Frass Records studio, it’s been easy going since that. I’ve produced many hits for Alkaline, he is a great artiste, very talented youth who is dominating the dancehall scene right now and I’ve known Sean Paul for over ten years, today he is definitely dominating the international scene so I love that I could get both of them on one song and see, it’s now running the streets,” DJ Frass said.

Gyalis Pro, which is produced by DJ Frass, and voiced on his Crazy Glue juggling riddim, was released in May.

Director Jonathan Poirier described it as “fun and sexy”.

“I just wanted to keep it very light and playful so that even though it was explicit, people that didn’t necessarily want to see the explicitness could see something in the video that they would like themselves. I wanted to make it acceptable by everybody, if possible. There is a clean version and there is a dirty version and the dirty version obviously ended up getting more views and people are talking about the explicit version more, which was expected,” Poirier said.

Sean Paul has been enjoying an unbroken string of massive international hits while the chart-topping Champion Boy deejay has also been riding the waves of success since his 2013 debut.

Sean Paul has been enjoying an unbroken string of massive international hits while the chart-topping Champion Boy deejay has also been riding the waves of success since his 2013 debut.

Both artistes will treat local fans to performances on the internationally acclaimed Reggae Sumfest later this month.