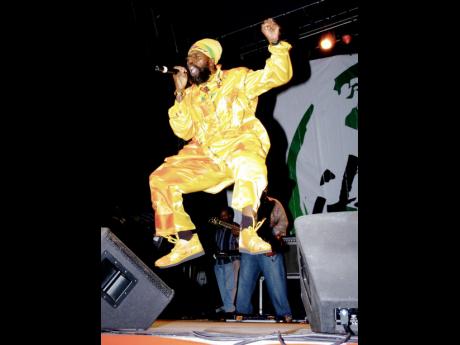 Capleton in full flight on stage.

“Capleton always delivers, so it doesn’t matter if he’s on Dancehall Night or Reggae Night. He blazes the stage whenever he touches it,” Joe Bogdanovich, CEO of Sumfest, said.

“He’s been one of those performers over the years that gets better each time. He’s a guy that has fire in his heart, fire in his soul, and he lights things up, so we’re looking forward to what he has to offer this year. Reggae Night is going to be something special, and people are going to see that we didn’t need international acts to come here and excite and pull a crowd because we have top-notch international acts right here at home,” Bogdanovich added.

Bogdanovich, who took over Sumfest in 2016, said his aim for the festival this year is to make Reggae Night as big as Dancehall Night.

“Every year, I think about how we can top the year before because growth is important for me. When we cut out International Nght, a lot of people were sceptical, but since then, Dancehall Night has grown to where we’ve seen record turnouts, and the aim now is to get the numbers up for Reggae Night as well,” he said.

“We have seen where Reggae Night has grown, but it’s not where we want it to be yet. Dancehall Nnight carries the most excitement of the two nights in terms of the buzz from people, and we want to get that excitement level up for Reggae Night as well.”

Bogdanovich said that this year’s line-up for Reggae Night was specifically designed to increase the excitement on the night.

“We have a very good line-up this year with a few surprises expected on Reggae Night, so we hope to top Dancehall Night this year. Jr Gong is going to be fabulous, and it will be his birthday, so expect something special from him. Beres always delivers, and Maxi Priest, too, is going to be phenomenal,” he said.

Meanwhile, there have been talks that dancehall’s leading lady, Spice, will be closing Dancehall Night this year. However, with just over a month to go until the greatest reggae show on earth takes over the city of Montego Bay, it is still unclear who the 2018 closer will be. “I can guarantee whoever that person is, they will perform to a packed venue because nobody will be leaving until the show ends, and trust me, they’re going to want to wait and see,” he said.

“We have artistes clamouring to close the show, so whoever that will be, they will be excited, and they will give it their best. It’s going to be a high-energy performance, and it will be worth it.”