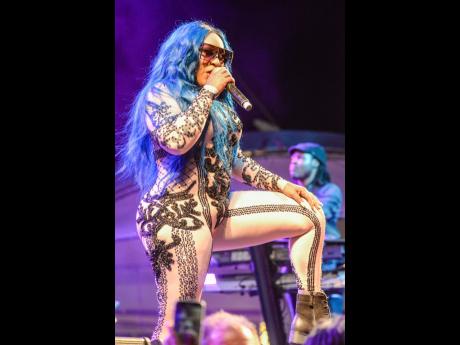 Her scorching performance at Reggae Sumfest last year sparked debate on whether dancehall’s leading lady, Spice, was now the new Queen of Dancehall.

She impressed local and international media alike with her engaging set, with Vogue being among the first in the international sphere to place the dancehall crown on her head.

Fast-forward a year later and Reggae Sumfest organisers are considering Spice as this year’s closer on Dancehall Night.

Speaking with the STAR on the possibility, Reggae Sumfest’s Joe Bogdanovich described the ‘Queen of Stage’ as a phenomenal act who always brings something special to Sumfest.

“I believe Spice is a brilliant artiste whose performance gets better every year, and that in itself is phenomenal,” he said. “She is dynamic and a force to be reckoned with, one who isn’t hard to work with, and that’s why we keep bringing her back each year. Everything always runs so smoothly with Spice and you can always expect her to come with something spectacular.”

Bogdanovich admitted that when he booked Spice for the show, he wasn’t thinking of her for the closing act, but said as the show nears, he’s seeing more and more how fitting it would be to have her bring the curtains down on Dancehall Night 2018. “It’s a great idea, and we’re definitely going to reach out.

“We wouldn’t be surprised if she accepted because we have a good relationship, and Spice is one of those artistes who understand show business and what this would mean,” he said.

“Spice is at the peak of her career. She’s up there with the women who have made their mark on dancehall and she continues to represent the culture on an international level. She’s definitely up there with Lady Saw, who was one of the best to do it (close the show) over the years.”

Speaking on that moment back in 2015 when Lady Saw closed the show, Bogdanovich expressed the need for more women to be given the opportunity to prove their worth on platforms such as Reggae Sumfest.

“I don’t have an answer for why more women haven’t been given that chance (to close the show), but I can say that the one woman who has did a phenomenal job, and I have no doubt that if Spice accepts, she will also give an outstanding performance. When given the chance, the women have always risen to the occasion. Spice is one such artiste, so regardless of where she performs, morning, noon or night, she’ll kill it,” he said.

Bogdanovich also explained the process behind getting an entertainer to close Sumfest’s dancehall night. He revealed that he has had encounters over the years that made him realise there are too many artistes who put money before culture. He said he has made it his point of duty to ensure that whoever closes Sumfest’s Dancehall Night understands that it is less about the money and more about the music.

“I’m trying to get people to understand the importance of Jamaican music. We should embrace culture like the rest of the world does and support each other and not price ourselves out of the music,” he said, pointing out that closing dancehall night on the ‘Greatest Show on Earth’ should be seen as a great opportunity for any artiste.